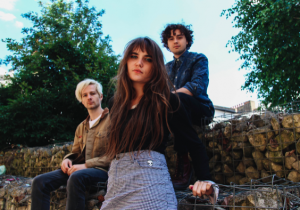 “A pummelling introduction from the scuzz-punk trio” – Clash

Having developed a fierce live reputation within London’s flourishing punk scene, the chaotic garage rockers have since earned support slots alongside the likes of Albert Hammond Jr, Spring King and Anteros and will be heading off on tour with label-mates The Blinders later this autumn.

In their newest cut, two minutes of boundless energy showcasing a band brimming with potential, the three-piece lay down a real marker and reinforce why they’ve received extensive backing throughout the online community (Clash, Dork) and across the airwaves (BBC Radio 1, BBC 6 Music, Radio X).

Discussing their upcoming release, the outfit stated: “I Heard A Cry deals with the misinformation we often feel regarding what’s happening elsewhere in the world. But at the same time, it’s about the will of many people who are trying to inform themselves”.

Produced by Margo Broom (Fat White Family, Goat Girl) and mixed by Tom Longworth (Catholic Action, The Vryll Society), Calva Louise’s I Heard A Cry is out now via Modern Sky Records and available on all digital platforms.