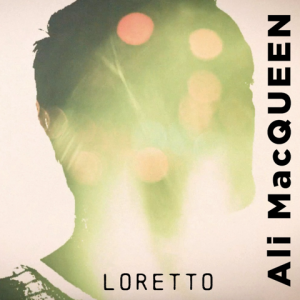 Embarking on a confident new path in 2021, ALI MACQUEEN returns with the brand new track: “Loretto” (out today, via Blaggers Records).Stream here: https://blaggersrecords.hearnow.com

A stately new single that laces the alt-rock spirit of Radiohead or Gomez via the Americana thrum of Neil Young and widescreen ambition of Sea Change-era Beck; from its naturally laid-back undercurrent to its life-affirming choral hooks ‘Loretto’ brims with the kind of assuredness it takes years to achieve.

And yet, like many of history’s greatest discoveries, MacQUEEN’s first new music of 2021 materialised as something of a happy accident. As MacQUEEN tells:

“Loretto came about in one of those fleeting moments of life, walking down a backstreet just north of Oxford Street. At the end of this alleyway was some graffiti, which was tagged “Loretto”, and that was it. By the time I walked out from the backstreet and out back on to the street, I was humming the chorus… It’s properly amazing when melodies just appear out of nowhere like that, and totally captures the mysteries and magic of writing songs.”

Inspired by that burning desire to escape from small-town suburbia with big dreams of what could be, “Loretto” transports the listener from the grime-spattered backstreets of the UK to the dust-addled highways of the American midwest, where MacQUEEN finds himself faced with one of life’s great crossroads.

“I remembered how I felt when I was stuck in my town, when I thought there was so much in front of me, and so did a lot of my friends. But places like that have a way of killing who you are, and extinguishing your dreams until you forget what your passions were, and you fall into a soul-crushing cycle of just existing. So it’s really a call to try and avoid that before things get too late, stay true to yourself and look forwards, not backwards.”

Growing up in a nondescript former market town in South Bedfordshire, Ali MacQUEEN cut his teeth with a variety of bands before moving to Nottingham and forming the Steve Lamacq-championed: The Autoplan.

With the band’s career cut-short as MacQUEEN faced a long recovery from a severe brain operation; he took up a new role working in a bookshop and writing for Record Collector magazine, all the while forming ideas for his own material. Recording his first two songs for Hope Recordings, “RedLights/Miss Whisky”, the tracks were praised by NME as “Like Beck and Nick Drake sharing a rollie on a park bench” and paved the way for a new journey as a solo artist.From near-miss deals with Universal at the Camden Barfly (who signed headliner Jack Garrett instead), to becoming a staple at venues such as The Rhythm Factory, The Troubadour, and The Lexington, earning a residency at The Half Moon in Putney; word about MacQUEEN’s music is proving uncontainable, building up a small but dedicated fanbase along the way.

After many twists and turns in a career that has been anything but conventional, MacQueen now finds himself in revitalised health and experiencing a songwriting gold-rush. Striking a deal with Blaggers Records in 2020, after 8 months honing his latest work and a prolific studio session, “Loretto” emerges as a first glimpse of this artist’s tantalising next chapter.

Written from the heart and hewn with the experiences of life-less-ordinary, “Loretto” is a statement of intent from an artist destined for the right direction.

“Loretto’s a call to remember what’s important to you, and not give up on the dreams or passions that make you who you are…” says MacQUEEN. “It’s about getting out, moving on, leaving things behind, starting something new and the excitement and promise of it all.”

Finding himself on an exhilarating new road in 2021 and heading down it with invigorating purpose, ALI MacQUEEN releases “Loretto” today (5th March), via Blaggers Records.STREAM HERE
FOR MORE INFORMATION
f/ https://www.facebook.com/mr.macq
i/ https://www.instagram.com/alimacqueenmusic/