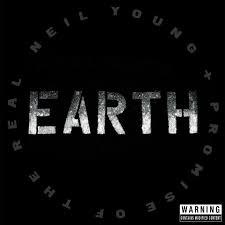 Earth is a live album by Neil Young and Promise of the Real, an American rock band featuring Willie Nelson’s son Lukas Nelson. The album was recorded on their Rebel Content Tour in 2015, and is a double album consisting of thirteen songs.

For those unaware, Neil Young and Promise of the Real first teamed up together in 2014, before releasing a studio album in 2015 titled The Monsanto Years – a concept album created as a criticism of agribusiness Monsanto. The album received positive reviews, hence the later creation of this, a live album. However, Earth is not just a straight run through of the songs from The Monsanto Years in a live setting. Instead, it features a selection of tracks from Young’s musical history, particularly focusing on songs that have an ‘earthy’ feel to them, hence the title of the record.

Because of this, it seems ever so slightly odd at times that Young has decided to collaborate with Promise of the Real again on this album instead of just hiring a backing band, considering that it’s really a Neil Young album more anything else. However for the most part, it works. The artists here are certainly all very talented and the songs do shine through, with particular highlights being My Country Home and Seed Justice, with it being seemingly obvious just why Young and Promise of the Real decided to work together. The songs here are for the most part classics, and Promise of the Real have a certain groove to them, lending themselves well to Young’s songwriting.

There are a couple of flaws though, and if pushed to get either Earth or The Monsanto Years, we would recommend the latter first and foremost. In order to preserve the album’s apparent ‘earthiness’, a lot of nature sounds have been included in between songs, and while it’s clear what the group are trying to do with this, it often falls short and it would perhaps be better if these had not been included as it sometimes disrupts the flow of the album. However overall, it’s still pretty good, and definitely worth a listen if you are a fan of Neil or Promise of the Real, and as live albums go it’s one of the better ones.