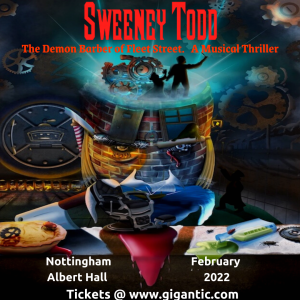 Presented by The Limelight Orchestra, the gruesome story of the murderous revengeful barber is one of Stephen Sondheim’s most well-known musicals combining tragedy and dark humour with powerful songs.

The staged concert featuring a full 40 piece concert orchestra will open with the strains of the famous Binns Organ echoing eerily around the music hall to transport the audience to the streets of Victorian London and the tale of bloody revenge.

Director Cat Orton said: “Our production of Sweeney Todd will create a truly immersive and exciting experience for audiences. As we in the musical theatre world mourn the loss of Sweeney Todd’s creator Stephen Sondheim, we celebrate his belief that theatre must always continue to grow and evolve and our production aims to do just this.”

Just a stone’s throw away, the city’s Victorian music hall, The Malt Cross, is also being pressed into service as a rehearsal space for the 20 strong cast led by Jon Orton as the cut-throat barber Sweeney Todd and Morven Harrison as amoral pie shop proprietor Mrs Lovett.

Morven said: “As we move through rehearsals, the anticipation of seeing the final product is growing. The unique setting combined with the stunning concert orchestra, gives us the opportunity to focus on smaller details – be that orchestral motifs or the undercurrent relationships between the characters.”

Musical director Paul Murphy adds: “It’s wonderful to bring the orchestra and cast together to present this staged concert of such a well-known and loved work by the musical theatre genius Stephen Sondheim. At a time when the theatre community is still reeling from the impact of the pandemic, it is more important than ever to produce these large-scale shows that bring together actors, singers, musicians and technical crew to create the wonderful live experiences we have all missed. We can’t wait to bring it to Nottingham audiences.”

The Stephen Sondheim Society is also looking forward to the new staging of this classic by the Limelight and its venture into the world of Sondheim. Tina Foote, on behalf of the longstanding nationwide society that celebrates the legendary musical theatre creator, said: “We are always excited to see fresh creative enterprise and Sweeney Todd promises to be an event of note in this beautiful setting.

“We can only imagine the rich sound of the Albert Hall organ and how perfect it will be for this production! The Society are looking forward to their trip to Nottingham – and also a pie or two… But will be keeping a wary eye on the fillings! We wish Limelight the best with their Sweeney Todd!”

On show days, there is even the option to enjoy a special handmade pie dinner pre-show in collaboration with The Malt Cross for those who dare! Diners will be entertained with true crime tales by the duo behind the popular Psycho Killer podcast.

With bespoke costumes and props curated by the Sheffield based company ‘Ministry of Steampunk’, the show will evoke the steampunk aesthetic. Audiences are more than welcome to enter into the spirit and come along in costume too.

Tickets are priced from £22-£30 with various concessions available and on sale now from www.gigantic.com/sweeney-todd-tickets. A BSL interpreted performance takes place on Thursday 17 February.

Follow us to see cast photos, show updates and news