Arboretum Sunsets kicked off with a weekend of folk punk headlined by Nottingham’s own Ferocious Dog on Saturday and New Model Army’s Justin Sullivan on Sunday. 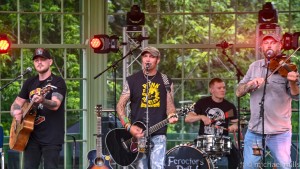 The opening weekend of the intimate summer series was given a warm welcome by more than 1,000 people coming out to see some of the first live music taking place this year.

Audience member Lee said: “This gig has been absolutely amazing. I have been shielding for over a year now and this is my first time out back to gigs and I’m so emotional today and so so happy and the fact that Justin Sullivan is one of my all time favourite artists, and that this is my comeback to the gig scene, I think I’m just going to cry.”

Julian Sullivan, New Model Army, headlining Sun night, said about playing again: “You get used to things much faster than you thought you would. After the last few months, I think we’ll all be changed but we don’t quite know how yet but as for getting back to socialising and gigging and things like that, yeah, this feels normal enough to me.”

Almost 50 artists have been announced from music heroes Tony Hadley and Richard Thompson to an all-day folk event hosted by singer-songwriter Beans On Toast and Homegrown, the all dayer featuring the best of the local music scene.

As well as the music, there will be the Arboretum Beer Festival, street food festivals from Nottingham Diners Club, and regular Sunday yoga & wellness sessions presented by Sweaty Betty all taking place in the historic Arboretum Park around the natural amphitheatre surrounding the Victorian bandstand.

It comes as the 2020 Arboretum bandstand sessions were revealed to be in the running for a national Music WeekLive Music Innovation Of The Year Event/Series which the industry title launched this year to reflect and celebrate the creative breakthroughs made in live events.

The Event in Numbers

47 playing artists made up of local and national touring acts

50 plus staff working at each event

Sunday 5th September – This Is The Kit New Kind Of Neighbourhood

+ MORE TO BE ANNOUNCED!

Photo by Michael Mills for NottinghamLIVE.  See our gallery HERE