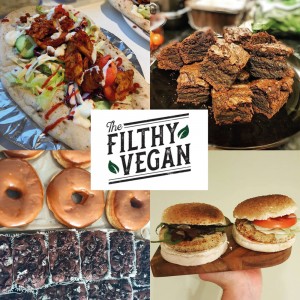 With healthy eating at the top of many people’s agendas and the number of vegetarians and vegans on the rise, this year’s Festival of Food and Drink welcomes more specialist producers with tasty dishes on offer.

Held at Nottinghamshire’s Clumber Park on Saturday 14 and Sunday 15 September, the Celebrity Chef Cookery Theatre also welcomes ‘EpiVegan’ Brett Cobley. Brett will be demonstrating recipes from his best-selling cookbook What Vegans Eat as well as putting people straight on the myths surrounding veganism.

“The biggest and most common myth is that you can’t get enough protein on a vegan diet,” Brett explains. “Anyone who says this doesn’t have a good enough grasp of nutrition or what protein actually is to pass comment on the subject.”

Amongst the various food and drink producers and street food vendors, with many offering vegetarian options, there are some vegan specialists. The Filthy Vegan, the original vegan take-away was launched in Nottingham in February and is off to a fantastic start. Started by James Freeman and Joseph Johnson, it specialises in vegan ‘dirty’ kebabs with hearty naan bread packed with griddled soya meat, a secret seasoning, salad, spicy sriracha sauce and homemade soya and garlic mayo.

Also appearing for the first time is Positive Bakes, which makes cakes and treats from great ingredients that are completely plant based and contain no refined sugars and are packed full of flavour.

Ticket prices start from just £7 in advance with free admission into Clumber Park included (usually £5 per person). £10 per adult on the gate. Child and Family tickets available. Dogs welcome. Opens 10am to 5pm each day. For more info, visit www.festivaloffoodanddrink.com