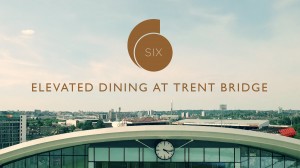 Nottinghamshire County Cricket Club have announced a wide-ranging partnership with Michelin starred chef Tom Sellers ahead of the opening of Six, a contemporary British restaurant and bar at Trent Bridge.
The Club commissioned the sixth-floor restaurant premises with panoramic views over Nottingham and West Bridgford as part of a multi-million-pound redevelopment of the media centre in the Radcliffe Road Stand.
They will look to source talent and suppliers with strong ties to Nottingham ahead of the opening later this year.
“We have spent months talking to chefs and restauranteurs to support this project, but Tom’s desire to make a contribution in his hometown off the back of his success elsewhere stood him apart,” said Nottinghamshire County Cricket Club Chief Executive Lisa Pursehouse.
“It’s our name above the door, but we’re delighted to have him advising in the background where his influence has already been invaluable.
“This is about more than food for Tom. We share a desire to give young people a chance and to make a real contribution to Nottingham.
“That encompasses opening a restaurant unlike anything else in the city and weaving in opportunities for young talent to contribute in the kitchen and front of house.”
Sellers, 31, grew up in East Leake before honing his skills in the world-renowned kitchens of Tom Aikens, Thomas Keller and René Redzepi.
His pursuit of a Michelin Star was realised within five months of opening Restaurant Story in London and his second property, The Lickfold Inn, continues to enjoy critical acclaim.
This marks as a homecoming of sorts for Nottingham-born Sellers, who will advise on menu development in partnership with a locally appointed chef, support a number of community initiatives and be in attendance to cook at six events throughout the year.
Sellers’ nod to Nottingham is apparent in his recent work. His Merry Men pop-up, celebrating the legend of Robin Hood, which transformed a Victorian warehouse into a medieval banquet, sold out a four-week run within hours of launching.
“I’ve always had an ambition to do something in Nottingham and this feels like the right time and the right fit,” said Tom.
“With a focus on developing young talent from the Nottingham area, I hope opportunities will be provided to young chefs to follow their dreams and carve out a career in the industry like I have.
“It’s unusual for me to come along at a stage where big elements of the concept have already been developed, and Six is a Trent Bridge restaurant with me advising in the background rather than the other way around.
“We hope people enjoy Six for what it is. There is room in every city for independent restaurants that combine the right food, service and setting. Put simply, that’s what we’re working on together to achieve.”
Six, Trent Bridge’s new contemporary British restaurant and bar, is set to open in March with early access for those who register their interest attrentbridge.co.uk/six
Tom Sellers has an impressive CV, his journey driven by the ambition to work with the world’s best chefs. Tom’s culinary story started at the age of 16 when he landed his first job working in a pub. Recognising his talent, Tom was encouraged by his boss to work in London, where he managed to get a job in the kitchen of Tom Aikens.
It was under Tom Aikens that Tom learned how to cook Michelin star standard food. Following those formative years, he then went on to work for two years at Per Se in New York under Thomas Keller.
Back in London, Tom spent a few years at Trinity restaurant still cooking, but also learning about the business of restaurants. He then went to work at Noma in Copenhagen while it was recognised as the number one in the world, with chef René Redzepi. Tom was there for just over a year and he credits René with teaching him how to imagine.
Tom has huge admiration for his peers, who he credits with having shaped and guided him whilst giving him the skills and vision to be the extraordinary chef he is now.
In 2013, Tom realised the dream he had harboured for ten years and opened Restaurant Story. At Story, Tom aspires to present his guests with the most intelligent, inspired and well delivered dining experience they have ever had.
The premise is simple; seeking to tell a story through the food they serve. Restaurant Story gained its first Michelin star only five months after opening, a fine achievement for Tom who was 26 years old at the time.
About Trent Bridge
Trent Bridge is an international cricket ground located in West Bridgford in Nottingham which has hosted the England cricket team since 1899. Established in 1838, the venue continues to serve as one of the leading hosts of international cricket and will co-host the 2019 ICC Cricket World Cup.
Trent Bridge is home to Nottinghamshire County Cricket Club. The Club re-invests all of its resources into its facilities, the professional team and community initiatives that provide opportunities for young people at risk of social exclusion.
The Radcliffe Road Stand was first built in 1997 and was overhauled as part of a multi-million-pound redevelopment which concluded in 2018. The restaurant space comprises two sixth floor dining room wings connected by a lobby bar, all with elevated views over West Bridgford and Nottingham.
Share this content....

Food: Louis Louis to crank up the Pizza base at Das Kino