Nottingham will be all shaken up when Nottingham Cocktail Week takes place in the city centre from Monday 3 September to Sunday 9 September 2018.

With over 55 venues having already confirmed their commitment to taking part in the seven day festival, Nottingham Cocktail Week is set to be a vibrant celebration of the city’s unrivalled cocktail scene.

For the event, venues have been encouraged to create three new cocktails based on three different themes. 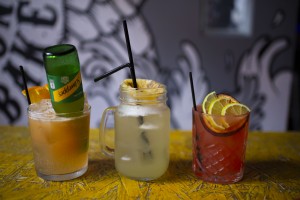 The first of these is a collaboration with another Nottingham business, the second needs to be inspired by a Nottingham personality and the third is a twist on a classic cocktail.

Participating businesses can create entries in just one or all three categories and will compete head to head in a competition to arrive at a winner in each category, with some great prizes for the three successful teams.

People will be able to view these special creations ahead of Nottingham Cocktail Week on the digital menu at itsinnottingham.com/cocktailweek and all cocktails will be available for people to enjoy during Cocktail Week.

A trail map is being produced to show the venues taking part and there will also be details of any special events and offers. People will be able to pick up a map from venues around the city and at other central points.  It will also be available to download from the It’s in Nottingham website.

In addition people will be enter a competition on It’s in Nottingham social media by sending in pictures of their cocktails and using the hashtag #NottmCocktailWeek to be in with a chance of winning a prize every day throughout the week.

“This is the first time that we have organised Nottingham Cocktail Week and we have introduced it because our members  told us that it will be a welcome addition to our exciting calendar of city centre events,” said Andy Crawford, a director of Nottingham BID, the organisers of this It’s in Nottingham initiative.  “Lots of venues have already committed to taking part and the drinks companies are also backing it.  People who have heard about it are really looking forward to sampling some of the new cocktails that the venues are creating.”

Pubs, bars, restaurants, hotels and casinos will be taking part in the event and among them are Boilermaker, CookieShake Bar, Pepper Rocks, Hockley Arts Club, The Alchemist, The Walrus, Harts, Bar Iberico, Chino Latino, Jamie’s Italian, St James Hotel and The Lace Market Hotel and Bodega.

For further information on the event visit: www.itsinnottingham.com/cocktailweek.

About the Nottingham BID

·           Nottingham BID is the company behind It’s in Nottingham, a brand used to promote the city which includes delivering campaigns and events throughout the year as well as a dedicated website and social media accounts.

·           Nottingham BID is a not for profit company that is privately funded by its members, who pay a percentage of their rateable value.

·           Its members are businesses and organisations in the retail, leisure, office and education sectors, within a defined BID Zone in Nottingham city centre

·           The BID’s aim is to put Nottingham firmly on the map as a regional and national city of choice for shopping, leisure, work and study by delivering a range of initiatives which are driven and shaped by the members.