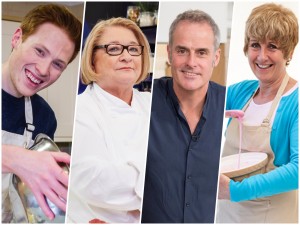 Britain’s favourite chefs Phil Vickery and Rosemary Shrager will be helping to celebrate the fifth anniversary of the Festival of Food and Drink, held at Clumber Park on Saturday 16th and Sunday 17th September. They will be joined by finalists from the last series of the BBC’s Great British Bake Off so here’s hoping for a fantastic birthday cake!

Phil will appear on Saturday alongside GBBO favourite Jane Beedle. As well as showcasing some of the ideas featured on ITV’s This Morning, Phil will also be sharing recipes from his recent book Phil Vickery’s Essential Gluten Free.

He will be recreating some of the dishes from his book in the Festival’s Cookery Theatre, sponsored by Welbeck Farm Shop, which is free to attend with seating for around 500 food fans but plenty of room around the edges to stand and watch.

Professional Landscape gardener Jane Beedle swapped her gardening rake for a rolling pin and followed her family’s passion for baking into the BBC’s famous Great British Bake Off tent. Jane made it to the final where she received the highly coveted Paul Hollywood handshake thanks to her delicious meringue crown.

Sunday sees the return of the fabulous Rosemary Shrager, who will be appearing with GBBO’s Andrew Smyth to share their culinary skills.

Rosemary proved she could cook just about anything, anywhere, when she took part in ‘I’m a Celebrity, Get Me Out Of Here’, and will showcase a mix of tasty recipes and sharing cooking advice with all festival goers.

She is best known for appearing on many TV programmes including; ‘Ladette to Lady’ and ‘Rosemary Shrager’s School for Cooks’ but most recently, The Real Marigold Hotel and The Chopping Block as well as Culinary Genius. Later this year, you will see Rosemary on BBC as part of the fabulous line up for The Big Family Cooking Showdown.

Andrew, an Aerospace Engineer with a fascination of how things work, achieved the coveted Star Baker title twice on his way to the GBBO final. He grew a firm following for his innovative creations combining his love of engineering and baking including geared pies and a gingerbread bridge.

Festival organiser Bev Channel said: “We are thrilled with this year’s line-up to help us celebrate our fifth anniversary. Phil and Rosemary provide an amazing depth of knowledge and an enormous sense of fun whilst our GBBO finalists help to inspire other amateurs. It’s the perfect mix!”

Now in its fifth year, Clumber Park’s Festival of Food and Drink is the biggest event of its kind in the region, bringing together delicious food and drink producers, artisan specialists and food experts, with over 150 exhibitors all under one roof in the Food and Drink Marquee.

Alongside the tasty treats of the food and drink traders, the Festival vibe continues with live music throughout from stars from the X-Factor as well as local musicians, as you enjoy the many Street Food traders and Pop-Up Cafes.