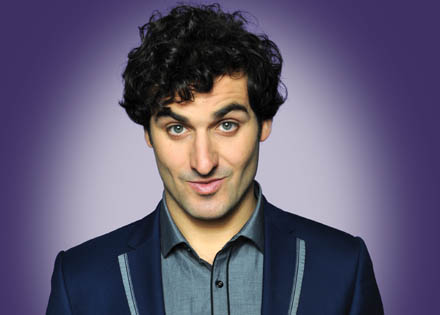 Before anything else, Patrick Monahan is a top guy. He’s a friend to everyone. Going to one of his shows is like having that friend who’s always that busy that they have to invite everybody they know on a night out so they can catch up with them all in one fell swoop. Patrick makes everybody feel welcome and a conscious effort to say hello to everyone during and/or after the show. And, of course, give you a hug. He loves a hug, does our Patrick.

The Theatre Royal and Concert Hall played host to Patrick on Monday evening in their infamous Third Stage. Tables and chairs organised in front of a small stage in the foyer of the dress circle. With a bar conveniently to the side. This made the experience all the more intimate. His current tour, That 80s Show, is loosely based around him growing up as an immigrant in the 1980s. I say loosely because, although he does tell a few stories from his childhood, his true talent lies in engaging certain audience members and turning their experiences and backgrounds into the real substance of the show. This works great with the small audience I was in because everybody felt involved. I’m not sure how well it would work in a bigger theatre surroundings, though.

After the show he invited anybody and everybody to come and sit down and have a chat with him. In true Patrick Monahan gig style, a lady had brought a homemade Bakewell tart along that got offered around. It was really tasty. And, of course, more hugs from Patrick.

I had a jaw achingly good time. It really was a laugh a minute. If you ever get the chance to see Patrick, then do. Also say hello to him. Have a hug or two. Hugs.