Winner of the Royal Academy of Arts’ Sculpture Award at the 2018 Summer Exhibition, Kate MccGwire will cap a memorable year with the opening of her first ever career retrospective at The Harley Gallery on the Welbeck Estate in Sherwood Forest, near Nottingham. 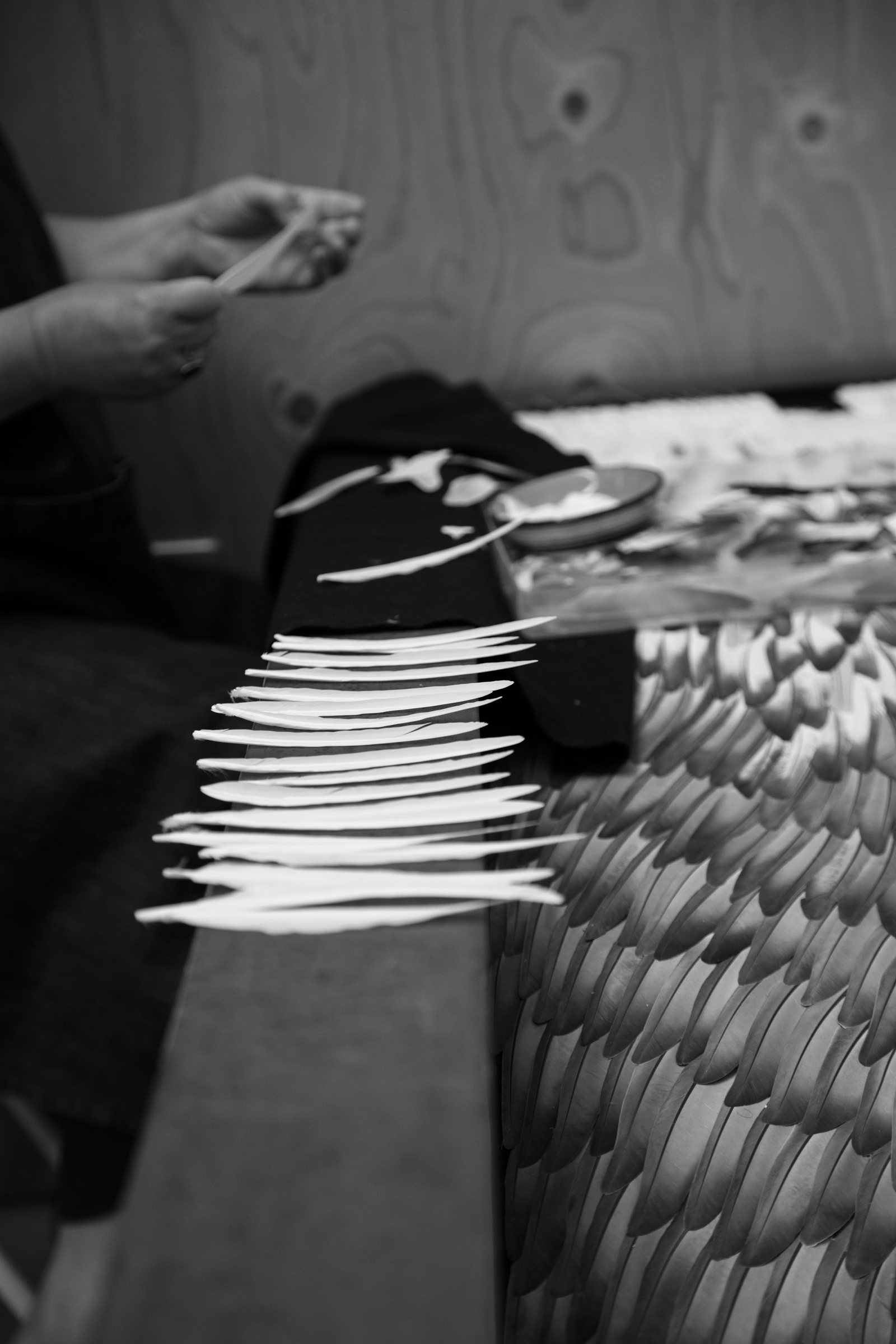 Opening on 20 October, the show will display more than 40 works by the renowned British sculptor with pieces dating back to her degree show – a graduation piece was bought by the collector Charles Saatchi in 2004 and he has been a supporter ever since. Feathers, quills, lead, fabric and drawings all feature in the collection.

Using natural materials to explore the play of opposites at an aesthetic and visceral level, Kate MccGwire’s works are familiar yet otherworldly, beautiful and disquieting, tranquil and malicious.

The highlight will be ‘Sasse Sluice’, a vast piece created from more than 30,000 feathers sent to the artist by pigeon fanciers all over the UK. It shows the feathers flowing in the direction of an impending destructive tidal surge with the patterns and eddies that would form as it pours over a sluice. Originally made to be shown on the floor of a dovecote, MccGwire is re-creating the work, which takes its name from an old English word for lock, to go on display vertically in four huge sections across a 20ft wall.

Kate said: “I’m delighted to be able to bring this piece to the Harley Gallery. It’s a very impressive and energetic work of which I’m immensely proud. Pigeons are often considered to be dirty and disease ridden but here the feathers look wonderful and have come from racing pigeon enthusiasts who have posted me the naturally moulted feathers – these birds have flown across the UK and often as far as Europe, but find their way back due to their miraculous homing instinct.”

Often using feathers and other natural materials to create hybrid creatures taking their inspiration by Greek and Roman mythology, Kate’s work references the natural world that surrounded her as she grew up on the Norfolk broads.

She continues: “This retrospective is very important to me. Bringing my work together has enabled me to see how it has developed and the recurring themes that have been in my imagination since childhood. I am interested in how we are drawn to things but repelled by them at the same time – the familiar, when seen out of place that defies reason. My forms are bodily and linked with ourselves, but made alien by the materials I use.”

Harley Gallery director Lisa Gee said: “To work with Kate on her first retrospective exhibition has been hugely enjoyable and stimulating.  I’ve been a fan of her work since I first saw a huge ‘creature’ made from thousands of game bird feathers apparently spilling out of a wall.  It was both enchanting and disturbing at the same time and provoked so many questions in my mind. To now be able to show the work here after Kate’s triumph at the Royal Academy this summer is a fantastic opportunity for our region.”

Playing will be several short films about seemingly uncontrolled movement – from the timelapse of the artist’s hair growing over two months to the replacement of her son’s milk teeth with adult teeth over two years. There will be also be a new film showing the making process of the Vermiculus series where live maggots are coated in graphite and set free on sheets of white paper. The patterns are created as the larva instinctively crawl away to escape the light.

Since graduating from the Royal College of Art in 2004 her uncanny sculptures have been exhibited at the Saatchi Gallery (London), the Museum of Art and Design (New York), Musée de la Chasse et de la Nature (Paris) and recently at Glasstress, an official collateral event of the Venice Biennale.