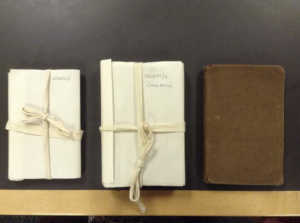 The wartime experiences of a young motorcycle dispatch rider from Nottingham are to be brought to life through a new play and an immersive exhibition.

Budding young writers are being given the opportunity to transform the personal account of Billy Richards prior to the outbreak of WW1 and through his wartime experiences into a short play.

Celebrated playwright Stephen Lowe and actress Tanya Myers will work in partnership with a historian to mentor the young writers recruited from Nottingham’s Television Workshop.

The Diaries of Billy Richards vividly captures the life and times of the young man from 1909 up to 1917. Two of the diaries were discovered hidden in a loft in a house in Sherwood in the 1950s and offer a fascinating insight into everyday life at a time of great social change.

A third diary describes the often mundane routines of wartime contrasting with vivid depictions of unimaginable horrors from his time serving as a Royal Engineer with the 55th West Lancashire Division in France. It was recently found in New Zealand and has now been reunited with the first two of Billy’s diaries housed at Nottinghamshire Archives. The diary was covered in Billy’s war uniform and is in pristine condition. 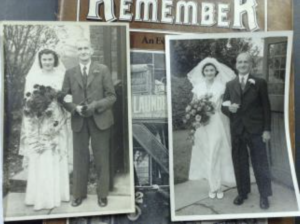 Now Billy’s journey from a young man growing up in Sherwood to the battlefields of France is being brought to life through this Heritage Lottery and Arts Council funded project. His story will inform a brand new play to be performed at Nottingham Playhouse.

A four day exhibition at Broadway May 7-11 2020 will also invite the local community to share their own memories of the time to help set the scene for Billy’s life.

Nottingham historian Chris Weir said: “These diaries reveal fascinating insights into Billy’s life and times. The first two diaries (1909-1911) record the hot-blooded Billy playing football, cycling down to Land’s End, dating Doris and entranced by films at Kinemacolor. He also keeps an eye on national events, including an eruption of Mount Vesuvius and the passage of Halley’s  Comet.

“The discovery of his diary from WW1 then takes his writing to another level of national importance. Billy records the brutality of war from first-hand experience of the battlefields. On visiting Arras he writes that it is nothing but ‘a heap of battered ruins’. This heritage project now creates a unique opportunity for a new generation to share Billy’s life, through his diaries, with a modern audience.”

Tricia Gardiner, from Offshoots, the community interest company that has secured the funding, said: “As soon as I started reading the diaries, I fell in love with them and knew I had to bring Billy to a wider audience. He has written so beautifully and with so much humour and emotion that we are immediately transported into his life and it helps us understand the experiences of those who were living through those tumultuous times.”

Despatch riders were used by armed forces to deliver urgent orders and messages between headquarters and military units. They had a vital role at a time when telecommunications were limited and insecure.

Lead researcher Alex Smyth has found Billy’s medal card which shows he was awarded the Military Medal in November 1917, a medal that was awarded to non commissioned ranks for bravery in the field. His medal card shows that Billy also received the Victory Medal and the British War Medal for his service.

With his war diary ending abruptly on 14 January 1917, a year after it began on 7 January 1916, it is hoped that the research may also uncover what happened to the young corporal after this date. His war pension shows he received a disability pension for neurasthenia, commonly known as shell shock.

This diary entry for July 30 1916 is typical of much of Billy’s firsthand experience of the horrors of Trench warfare during the First World War.

“I made a tour of inspection round the trenches and rounding one of the bends I found an arm sticking out from the ground. The hand was still open and quite black from exposure. Apparently the unlucky Hun [was] intending to hurl a bomb, for the missile lay in the trench but he had been buried before he had accomplished his task. How terrible our bombardment must have been may be judged from the fact that one shell hole measures 140 feet across and 100 feet deep. At the bottom lay a pond. Absolutely crimson – the life blood of many poor fellows. It was a horrible sight and is all too common now.”

The Diaries of Billy Richards Facebook page has been set up to share the stories and historical memorabilia discovered to bring his world to life. Anyone who has information to share either about Billy or life in Nottingham in the early 1900s can contact the Billy Richards project via facebook.