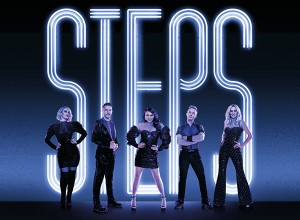 Three years after they staged the UK’s most successful comeback of the decade, enduring pop legends Steps – aka Claire, Faye, H, Lee and Lisa – return once again with their new album, What The Future Holds to be released on November 27th 2020 and the sure-to-be epic, What The Future Holds 2021 Tour, stopping off at the Motorpoint Arena Nottingham on Friday 3 November 2021. Steps will be joined on tour by the brilliant Sophie Ellis-Bextor as special guest.
Kicking off a flurry of exciting news, the five-piece premiered their first single What The Future Holds<https://steps.lnk.to/WTFHPR> on Zoe Ball’s Radio 2 Breakfast show. Next week, their tour will go on general sale from Friday 18 September 2020 at 10am.
Fans will be able to stream and download the brand-new single What The Future Holds<https://steps.lnk.to/WTFHPR> after the global premiere on Radio 2, where it will be available on all digital platforms. Built around a typically Steps-esque bittersweet refrain of “one foot in the past and one foot in the future”, the album’s thundering, gloriously dramatic title track was penned by pop queen Sia and is the perfect statement for a band who have taken a wave of nostalgia and alchemised it into an album full of future anthems.
Tickets go on sale at 10am on Friday 18 September 2020, with prices starting from £42.18. All prices listed include admin and facility fee. Hospitality packages are available.
Tickets can be purchased online at  https://www.motorpointarenanottingham.com/online/article/steps
Tickets cannot be purchased in person at the venue or via phone.
A venue pre-sale will take place from 10am on Thursday 17 September 2020. Current mailing list subscribers received the pre-sale email on 08.09.20 and are asked to check their junk/spam folders if they cannot find the email.
Purchase a ticket for the Motorpoint Arena car park and enjoy parking within just a few minutes’ walk of the Arena. Purchase your car parking ticket for £10 per car when you book tickets online. Click here<https://www.motorpointarenanottingham.com/Online/Article/car_parking> for more information.
Their sixth studio album, What The Future Holds<https://Steps.lnk.to/FuturePR>, will be released on November 27th via BMG, and will be available on all digital platforms plus CD, Vinyl (including a limited edition transparent pink edition) and Cassette. A must for all Steps memorabilia collectors, the album will also be available as part of a Cassette Collection featuring five separate transparent pink solo cassettes with an intro from each band member, all in a special collector’s box.
Their most ambitious album to date, What The Future Holds<https://Steps.lnk.to/FuturePR> showcases the big melodic choruses of their top-tier bangers but also brings back the harmony-laden ballads and some atmospheric mid-tempos. What the Future Holds<https://Steps.lnk.to/FuturePR> is the best distillation of Steps so far; an album that shows both a deeper shade of blue and a brighter future. Their 6th album sees them reunite with writers such as Fiona Bevan (One Direction, Lewis Capaldi), Ina Wroldsen (Shakira, Britney Spears) and Karl Twigg (who worked on their first three albums) plus experiment with songs written by the likes of Greg Kurstin (Adele, Beyonce), Hannah Robinson (Kylie) and new pop shape-shifters such as Gracey and MNEK.
Speaking of the album and tour, Steps add: “We will never forget the past with Steps, it’s what made us, but we’ve got to look to the future too. We were so thrilled that the last album was a success and it gave us a new lease of life. Performing live has always been our favourite part of being in Steps – we had the most fun of our career on the last tour and we’re already planning for the next one to be our biggest spectacle yet. We’re also thrilled to have Sophie Ellis-Bextor as our special guest on the What The Future Holds 2021 Tour – her catalogue is full of floor-fillers and she knows how to get any party started. We are so excited for everyone to hear this new album and to come join us on tour.”
Launching during the halcyon days of pop in 1997 with their line-dancing classic 5,6,7,8, Brit award winners Steps set about re-turfing the music landscape via 14 UK top 10 singles and three multi-platinum albums in three years including #1’s Tragedy and Stomp. Fast forward twenty years, the band returned with the mighty Tears On The Dancefloor, which hit #1 on the physical and iTunes album charts and went Gold within a matter of weeks, becoming the second biggest-selling independent album of 2017 behind Stormzy. Their subsequent ‘Party On The Dancefloor’ tour saw the band sell out twenty-two arenas. 23 years on from their debut, 2020 sees them return with What The Future Holds<https://Steps.lnk.to/FuturePR>.
Share this content....