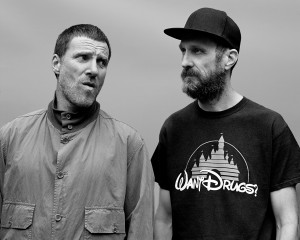 Times like these require a band like Sleaford Mods. Except, of course, there are no other bands like Sleaford Mods. They’re back with new album ‘Spare Ribs’ (out Friday 15 January 2021) and a UK Tour performing in their hometown at the Motorpoint Arena Nottingham on Saturday 27 November 2021.
Tour tickets go on sale at 10am on Friday 15 January 2021, with prices starting from £29.75. All prices listed include admin and facility fee.
Tickets can be purchased online at https://www.motorpointarenanottingham.com/online/article/sleaford-mods
Tickets cannot be purchased in person at the venue.
Purchase a ticket for the Motorpoint Arena car park and enjoy parking within just a few minutes’ walk of the Arena. Purchase your car parking ticket for £10 per car when you book tickets online. Click here for more information.
Polemical frontman Jason Williamson and dexterous producer Andrew Fearn kick against the pricks with unrivalled bite and wit, railing against hypocrisy, inequality and apathy with their inimitable, scabrous sense of humour. And ‘Spare Ribs’, their astonishing 6h album, featuring Amy Taylor of Melbourne punks Amyl and The Sniffers and the British newcomer Billy Nomates, finds the duo charged with ire at the UK Government’s sense of entitlement, epitomized by its devil-may-care approach to the coronavirus crisis.
In fact, Sleaford Mods are so plugged into the zeitgeist that attention-grabbing new song ‘Shortcummings’ was written five months before shamed political adviser Dominic Cummings embarked on his infamous trip to Barnard Castle. “I could see some things developing; I got quite interested in what he was about,” says Jason, adding that the song deals with “the disorientation being caused by his ideologies”.
That song emerged from an initial January session at JT Soar Studio in the band’s native Nottingham, a period of creativity that birthed four songs that appear on ‘Spare Ribs’. As we all know too well, though, a lot has happened since then. Sleaford Mods continued to work in lockdown, but something wasn’t sticking. “The songs I’d worked on that Andrew had sent me weren’t very good,” Jason admits. “We flung the rest of the album face-to-face.”
Reunited for a furious two-week studio blitz at JT Soar in July, he and Andrew crafted the rest of their excoriating new 13-song album. It kicks off with their first-ever ‘intro’ track, the experimental ‘A New Brick’, which sees Jason adopt the persona of, as he describes it, a “circus master”, acknowledging with ironic jolliness, “We’re all so Tory tired / And beaten by minds small.” There is, he insists, no reason to feign optimism about 10 years of the Tories: “The only way you can wage war against them by explaining it in an intelligent manner, and not feeling intimidated at coming across as being negative.”
The working-classes are “completely disorientated” by Tory rule, he adds, but Sleaford Mods are motivated by truth-telling, rather than sugar-coating. ‘Spare Ribs’ is not an album that offers platitudes or easy answers to class division: ‘A New Brick’, for example, represents “another barricade, another part of the wall that you can’t seem to get over”. Jason’s response is to point this out and laugh bitterly, rather than make the futile claim that he can surmount it, which he says would be empty and “careerist”. Leave that to the other bands Sleaford Mods opened the door for when they emerged more than a decade ago.
The result is the duo at their most inspired, continuing the poppier approach that they began to explore with ‘Eton Alive’. Andrew’s (somewhat underrated) beats are even more complex than usual, his songwriting at its most full-bodied, at times (as on ‘I Don’t Rate You’ and ‘Elocution’) veering into full-on electro-pop. There is no contemporary comparison for the production on a Mods record, which stands in its own field. As Jason explains: “Andrew has very intelligent levels of inspiration that are not necessarily connected to other artists… He is a producer’s producer.”
For his part, too, Jason is enjoying even greater lyrical and vocal inventiveness than before, influenced more by singer-songwriters such as Alex Cameron and Aldous Harding than the rappers he typically draws from. Listen to him sing the hooks on ‘Nudge It’ and ‘Fishcakes’, for instance, and you’ll hear a musician subverting expectations with glee; there is a lot of levity here. “It’s led me to become more open to the traditional song again,” he says. “We’ve brought that forward even more from ‘Eton Alive’.”
This is a liberated album, Jason having overcome, in his words, “a period of feeling ashamed about being working-class and the way I talk”. During the making of this record, he learned that he suffers with the birth defect spina bifida, a potentially fatal affliction; the discovery brought back powerful memories of his childhood, which are evident on moving closer ‘Fishcakes’.
A sample of the working-class Nottingham academic Lisa McKenzie opens the track ‘Top Room’, pointing to another sign of the band’s rejuvenation: this is the first album for which Sleaford Mods invited featured artists. Jason describes Amy Taylor as “really witty and a great frontperson” and a great new angle,” adding of Billy Nomates: “I was getting more into soul and R&B stuff around ‘Eton Alive’, and her voice is really close to that; she’s a great songwriter.”
‘Spare Ribs’ is the sound of a band so sure of their own sonic terrain that they can now explore its outer regions. The album’s title, Jason says, emerged from “the idea of the amount of people that died from the first wave of coronavirus; human lives are always expendable to the elites… We’re in a constant state of being spare ribs.” Yet Sleaford Mods are an essential part of Britain’s musical anatomy.