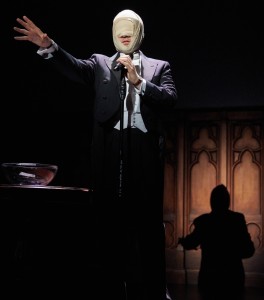 Derren Brown, the multi-award winning master of mind control and psychological illusion, is bringing his latest sensational show UNDERGROUND back to UK and Irish theatres in 2018.

From April 3 to July 5 2018, Brown will be enthralling audiences with his 2017 ‘Best of’ hit show, UNDERGROUND in which he fuses together a collection of his favourite work to create a jaw-dropping experience of magical genius.

Tickets on sale from today* Tickets go on general sale for 24-28 April 2018 at Theatre Royal Nottingham on Wednesday 6 December 2017 at 9am.

Derren revealed : “Underground was originally written for audiences in other countries who hadn’t seen me before. It meant finessing and re-visiting past pieces and seeing them with fresh eyes.

I sat down with my two co-writers and directors and we thought – ‘What would make the best possible Derren Brown show?’ None of us were sure what the UK would make of it, but the resulting show felt so good, and met with such a great response when warming it up in London, that we decided to tour it here too. The reviews have been astonishing, and people who’ve seen all the shows have said they love being surprised by them again, and those who don’t know me so well are getting to see the best material for the first time. It’s a huge, huge joy to perform”.

This is the second leg of the UNDERGROUND tour, direct from the West End production at the Playhouse Theatre, which ran for thirty-five packed out performances in September & October 2017. The sixty-three day tour will embrace Dublin and Cork and include Belfast, Cardiff, Glasgow, Liverpool, Norwich Hull, Canterbury, Nottingham, Eastbourne, Bournemouth, Dartford and Southend.

Derren’s live shows have won him two prestigious Olivier Awards – Something Wicked This Way Comes (2006) and Svengali (2012). He has played to sold-out houses across the country every year since 2003 to over 1.5M people. His previous  UK shows, Infamous, (2013, 2014), Miracle (2015, 2016) have toured to great success, enjoying critically acclaimed seasons in the West End of London. He recently made an enthusiastically embraced stage debut at the Atlantic Theater in New York with Derren Brown: Secret.

Not suitable for under 12s

Not suitable for under 12s

On General Sale Wednesday 6 December 9am

Theatre: FULL LINE UP ANNOUNCED FOR THEATRE ROYAL’S BEAST OF A PANTOMIME, BEAUTY AND THE BEAST!