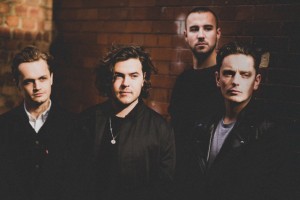 Amber Run are amongst the first wave of bands announced for this years Dot to Dot Festival, which returns to Nottingham on Sunday 28 May. The Nottingham band will appear at all three legs of the festival – in Manchester, Bristol and here in Nottingham over the last weekend of May.

Joining the band, whose new album, For a Moment, I Was Lost, is out now, will be euphoric rockers Sundara Karma and Californian act The Growlers.

“After our record-breaking festival in 2016 we are so excited to bring the festival back to Manchester, Bristol and Nottingham this year! We are always proud to see so many previous Dot To Dot artists become huge successes, with Sundara Karma working their way up the ranks to headline this year’s event. We pride ourselves on finding & nurturing new artists, we can’t wait to see the stars of the future playing in small venues this year before their big breaks. This first announcement is only the tip of the iceberg, and there are loads more phenomenal performers still to be announced across multiple venues very soon!”

Tickets for the festival, which in past years has seen performances from the likes of The xx, Ed Sheeran, Frank Turner and Nottingham’s chart topping singer Jake Bugg, are available now at www.alttickets.com starting from just £12.

Keep an eye on www.dottodotfestival.co.uk for more information and announcments and check out the festivals Twitter, Facebook, Instagram and Snapchat accounts to stay in the loop.