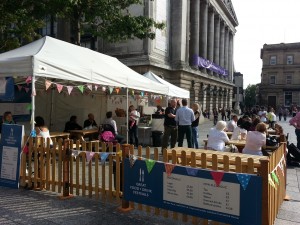 Following on from the success of The Great Notts Show in June, A Taste Of The Great Notts Show, held on Smithy Row 5 -7th September and 26th  – 28th September, showcased some of the incredible food, drink and craft companies who are passionate about local produce in the East Midlands.The shows were a great opportunity to try new foods from local producers such as Four Seasons Pizza. This innovative new company has bought delicious and traditional Italian Pizza to the street food scene.  The ‘made to order pizzas’ are prepared with personalised toppings using a traditional stone baking oven on the street. Founded in June of this year, the stall has a rustic theme which gives you an idea of the the love and dedication the three man team have for the business. Dough is freshly prepared by the trio with high quality and fresh produce for the toppings, all of which are on show on the stall so you can pick and choose your perfect pizza which is created in just three minutes. 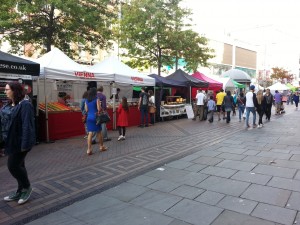 Meltworks Artisan Toasies did away with any old memories of the sandwich toaster with their Artisan Toasties, inspiration for which came from Australia where sour dough is widely used to make Jaffals (Aussie toasties)Following a visit down under, proprietor Jaime came home with the taste of freshly baked sour dough staying with her. Upon her return home to the Midlands she launched Meltworks. The company offers what they describe as “The best comfort food on the go” with options including the Ultimate grilled cheese sandwich, along with other fillings including Ham & Cheese, Cheese & Bacon and Cheese & Tomato. With a catering background which includes time at Nottingham’s Aubergine and Jam Cafe. Jaime is keeping it local by sourcing the sour dough bread from Welbeck bake house and using Lincolnshire cheese. Other food inspired by cultures from around the world included an Oriental feast from Som Tam Thai and also Caribbean cuisine from Caribbean Fusion. 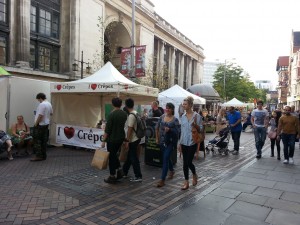 Many producers joined in ranging from Nottingham’s Johnny Pusztai to I love Ostrich  – perfect if you fancied something a little different, they also offer other rare meats. There was also Brocklebys Pies, The Smokehouse, The Solar Lemon, Snowdonia Cheese Co, Vienna Olives, Hartland Pies, Pig in the Middle Sausage Rolls, Oils from Fussels Fine Foods or, if you have a sweet tooth, you could have been tempted by The Treat Kitchen who had lots of chocolatey goodies, I love Crepes, Fudge Glorious Fudge or Simply CakesWith so many to choose from, the only difficulty was deciding which of the goodies on offer to try first.If you want to keep up to date with future shows you can follow on Twitter @greatnottsshow or Instagram @the_great_notts_showBy Tanya Raybould