Music Venue Trust (MVT), which represents hundreds of grassroots music venues, has revealed the results of a wide-ranging survey to assess audience confidence in returning to performances at grassroots live music venues following the COVID-19 outbreak.

Whilst 89% of respondents are ‘very eager’ to return to venues – with 93% missing the atmosphere of a live show – only 36% currently feel that it would be safe to attend live gigs during the Covid-19 crisis.

That figure rises to 60% in August/September and, when thinking of attending gigs in October, 71% of respondents feel it would be safe to attend.

These findings follow the urgent warning issued to the UK government by MVT last week stating that an immediate cash injection of £50m is neededto prevent mass venue closures in July, August and September.  The catastrophic effects of closure during the COVID-19 pandemic has led to MVT identifying this sector-specific rescue package as being fundamental to the survival of a large number of its member venues. MVT are also proposing a one-off cut in VAT on ticket sales for the next three years for venues and promoters.

MVT surveyed its member venues and found, with 2-metre social distancing, only 13% of
them felt opening was a practical possibility due to their premises’ layout and of those, 96% said it would be financially ruinous to do so because of the radically reduced number of attendees.

MVT founder and chief executive, Mark Davyd, said, “The government needs to read their own guidelines on the risks posed by singing, dancing, being in confined spaces and being in close proximity to other people. The combined impact of those risks is that the live music experience cannot currently be brought back in any form that makes sense for audiences or artists in grassroots music venues. And the survey is telling us clearly that audiences already know this” 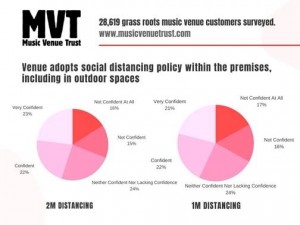 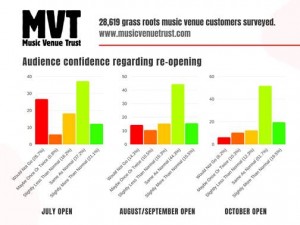 “2 metres or 1 metre, it makes no difference” said Davyd. “The message from Public Health England is that grassroots music venues should not currently be operating and the audience survey confirms that the gig goers already know this.”

The live music industry in the UK, which generates £5.2bn for the UK economy and a further £2.7bn in export revenues, is facing a substantial loss of infrastructure, with 90% of venues and festivals currently facing permanent closure. This would result in the total collapse of the sector and thousands of job cuts including promoters, production companies, managers, agents, artists and others, which form part of an inter-dependent eco-system that is the UK music industry, alongside the loss of very substantial VAT and income tax receipts by HM Government.

Music Venue Trust launched its #saveourvenues campaign in April, which has so far successfully raised over £2m to help support grassroots music venues through this crisis.

Mark Dayvd said, “We are incredibly grateful to artists and audiences for everything they’ve done to prevent closures until this date. But ultimately whether venues survive or whether we see hundreds of closures is up to the government. These grassroots music venues have done the right thing, and they need to keep doing the right thing. To do that they need the government to do the right thing. Act swiftly, step in, and take action right now to protect the incredibly vibrant and vital grassroots sector that sits at the centre of the nation’s musical reputation”