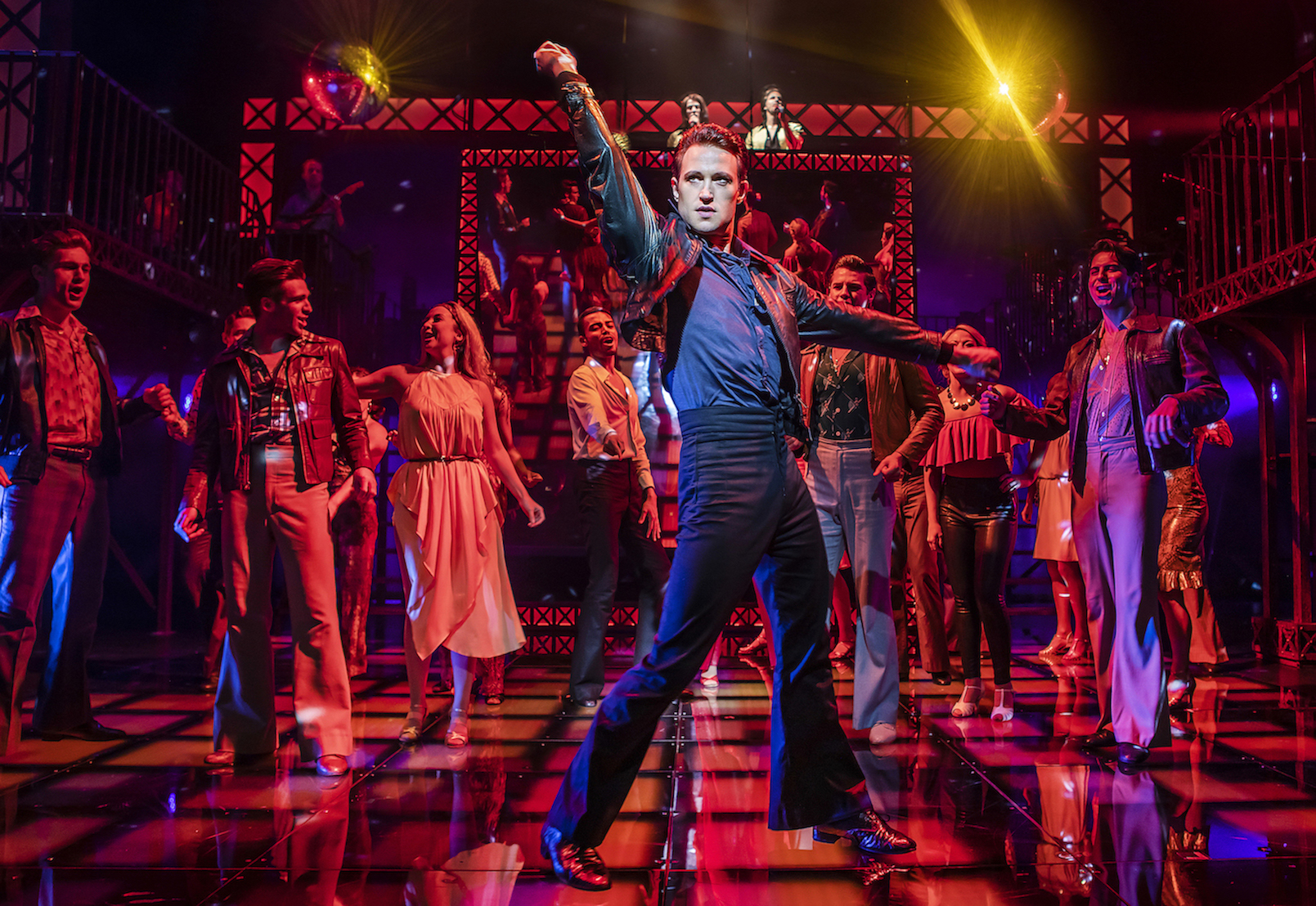 Marking 40 years since it’s UK theatrical release, Saturday Night Fever, the musical, is spectacularly reimagined from dancefloor to drama, catapulting the audience straight back to the 70s where we join young, working-class, Brooklyn-born Tony Manero (Richard Winsor) on the dancefloor in true, disco diva-style.

Anyone who has seen the film will know of the humour, heartache and tragedy that befalls one of cinemas most memorable characters, Tony Manero, first played by John Travolta. It was a plot which shocked the 70s audience it first previewed to, taking the audience on a journey through highs, lows and heartbreak using the encapsulating glamour of the 70’s disco movement to address some darker subject matters such as drug-abuse, sexual assault and suicide.

But this show completely reignites the plot (something I didn’t think possible,) and it does it well – with even more drama, dazzling choreography and glamour than ever before. Bringing the Bee Gees and Travolta’s all-dancing, all disco delight back to life, Bill Kenright’s production of Saturday Night Fever had me wanting to run home and get my glad rags on to join them on the dancefloor- but there was no time for that so I clapped along and tapped my feet instead.

The dance moves, and especially the timing are impeccable. The script clever, yet humourous presenting the perfect combination of the sad realities of Tony’s family life, the tragic suicide of Bobbie C and the charming yet vulnerable love story between Manero and Stephanie Mangano, played by the stunning and graceful Olivia Fines.

The Bee Gees – yes really, Maurice, Robin and Barry – take centre, rear stage. And their vocals, flawless throughout conjure up childhood memories of vinyls or CDs being played on repeat. It’s not surprising that the film’s original soundtrack is still the best selling movie soundtrack of all time, however in this reprise Bill Kenwright has added in some bonus tracks such as Tragedy and Immortality!

Both Winsor and Fines have an incredible on-stage chemistry that I, myself fell in love with during every hip swing, jive and grind. Their casting together was a brilliant choice. Although while Winsor (originally from Nottinghamshire – fun fact) does a great job of bringing the egotistic strut and sassiness of Tony Manero to the stage I couldn’t quite help thinking that any one of 20 supporting performers could have stepped into his dancing shoes and given him a run for his money…that was until his tear-jerking solo where the plot turns from joy to heartache where Winsor was able to showcase his ballet background.

Of worthy mention, and a firm favourite among the stalls had to be the electrifying DJ Monty (played by Faisal Jaye) who seemed to send an electric bolt of energy through the dancefloor from the platform he graced with his charismatic style and hyperbolic disco moves. Our faces were painted with smiles whenever his feet moved – I’d pay to see him take centre stage!

The costumes were slightly underwhelming, and I felt this was shown during “the big reveal” of Tony Manero’s three-piece suit. Perhaps that’s why the director felt the need to undress Winsor down to his pants in a bid to keep the audience’s attention – I’m just not sure that was needed, although some of the older women in the audience appeared to enjoy it.

The lowering of disco balls into the audience during the bigger, more show-stopping numbers really brought sparkle to the auditorium and were a great touch at keeping the audience engaged and involved.

From start to finish the music, choreography, content and execution was absolutely fabulous and just as the Bee Gees were unforgettable so too is this production! Never before have I seen a full auditorium give a standing ovation on the opening night of a musical production, and I’m sure this won’t be this cast’s last.