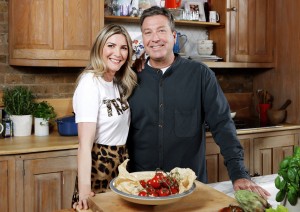 Foodie favourite John Torode is back by popular demand to headline this year’s Festival of Food and Drink, held for the seventh year at Clumber Park on Saturday 14 and Sunday 15 September.

Chef, TV presenter, judge of BBC’s MasterChef, Celebrity MasterChef and Junior MasterChef, and a regular on ITV’s This Morning, John will once again bring a stunning menu of recipes for live demonstrations as well as signing his cook books and joining VIP guests for an exclusive ‘meet and greet’.

John made his Clumber Park debut back in 2015, sharing recipes from his bestselling book My Kind of Food and delighting fans with his behind the scenes stories. He returned the following year to support his fiancé Lisa Faulkner, with whom he now presentsJohn and Lisa’s Weekend Kitchen on ITV.

John, who will appear at Clumber Park on Sunday 15thSeptember, joined the Conran Group in 1992, starting out at Pont de La Tour before becoming Sous Chef at Quaglino’s. In 1995, John became Head Chef for the launch of Mezzo in Soho.

He opened Smiths of Smithfield in 2000 in the heart of Smithfield Market, followed by The Luxe, which opened at Spitalfields Market in 2009.

John said: I had such a great time at Clumber Park a few years ago, I can’t wait to come back. Looking forward to meeting the locals and trying the local produce.”

Festival of Food and Drink organiser Bev Channell said: “We can’t wait to welcome John back to Clumber Park. He is full of enthusiasm, not only for the recipes he shares, but also the producers he meets at the Festival. With Laurence, Brett and Rachel also on the menu, it’s a very tasty line-up.”

Ticket prices start from just £7 in advance with free admission into Clumber Park included (usually £5 per person), offering a fantastic saving. Children aged five years and under are also admitted free. Family tickets are available, with entry for two adults and two children up to the age of 16 years, from £20. For more info, visit www.festivaloffoodanddrink.com