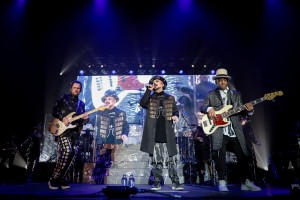 I looked along the line of albums.  One caught my eye.  On the cover it had a beautiful man with long hair and make up.  That man was Boy George.  I was eight years old.

I’d recognised him because I’d seen Karma Chameleon on tv and loved it, and so with my first ever record token, I bought Colour by Numbers by Culture Club, and thus began my love affair with them.

I thought I was so grown up. My Grandma had cable TV, a rarity in those days, so I made my Dad take me to her house to watch a Culture Club concert they were showing.  It was George’s red hair era – all my eyes saw again was this beautiful talented man with this incredibly unique voice.

Astonishingly last night (November 9th) was the first time I ever got to see Boy George and Culture Club live. We’re all a bit older, but thankfully little else has changed.

Ok, so the hairs shorter (his not mine), but that unmistakable voice; maybe a little deeper, older and wiser, is still the same.  We’ve all been through a lot over the years, Boy George more than many, and so the songs which provided the soundtrack to our youth take on new meaning for us all.

Support is provided first by Tom Bailey of The Thompson Twins. A kind of Parisian disco version of We are Detectives heralds his arrival on stage. Dressed all in white, as are his all female band, he opens with the classic Love on your Side followed by the title track of his most recent album Science Fiction. Being localish to Nottingham (Chesterfield) this was a homecoming gig for the singer, songwriter and composer.

More upbeat pop melodies follow; You Take Me Up, Doctor Doctor, Hold Me Now proving Tom is sounding as good as ever and has the audience on their feet from the start.

After a short interval, Belinda Carlise takes the stage.  I’d actually forgotten how many hits she’d had, but like Tom, before she fills the 40 minute warm up spot effortlessly with hit after hit and sounding great. 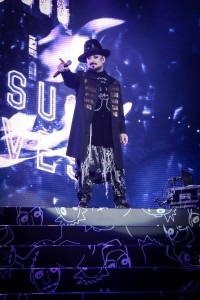 Appearing on stage after a lengthy stint of darkness builds up the anticipation is our main attraction.  There’s some pretty flashy lighting going on, stunning graphics and then that voice.  Opening with a 2018 number, God and Love, they spend the first part of the gig alternating between old and new material with Time (Clock of the Heart), Let Somebody Love You, It’s a Miracle.

The audience appreciate the new numbers but they love the classics, such as the one that started it all; Do You Really Want To Hurt Me.  Victims follows.  I hear somebody behind me say ‘His voice has got to be up to it for this one’ Thankfully it was, and if anything, more soulful. It’s a shame people are waiting for you to fail.  It would be nice if we all saw the world through those of the eight year old who saw nothing but a talent. Not caring about gender or sexuality, it was about the music. 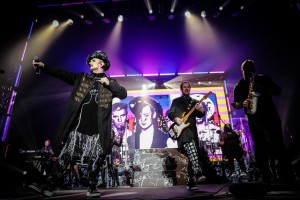 Having said that I do remember thinking the drummer was nice, turns out so did George.  Jon Moss was the only one missing from the original line up of guitarist Roy Hay, bassist Mikey Craig and George.  His absence isn’t mentioned, even though he is on the tour posters.  a quick google and the tabloids have their side of it, something George and co have probably gotten used to over the years though his attitude comes across as his doesn’t care about them anymore, he’s happy doing what he loves and performing and it’s great to see him looking happy and healthy.

The set ends with a clever mash up of Church of the Poison Mind and Wham’s I’m your Man before the inevitable, well deserved encore sees them return with another new track Life. A tribute to David Bowie, who George credits as the artist who changed his life by showing him it was ok to be different, follows with Lets Dance and also Aretha Franklin’s Chain of Fools. Of course we had to end the night with Karma Chameleon, the song which simply needs no introduction as George simply says ‘Shall we?’ 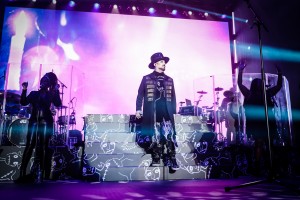 After all those years of waiting they didn’t disappoint. They were as poppy, witty, soulful and indeed beautiful as I’d always believed them to be.

Disclaimer:  My tickets were complimentory but my views are my own